I thought I’d try making my own version of ‘unicorn bark’, the viral food sensation that recently swept through Facebook and Pinterest! Now I’m not much of a whiz in the kitchen, hence I ran into some difficulty due to some baking chemistry, haha… But it all came together in the end! Read on below to see how you can make this rainbow treat at home 🙂 To begin with, melt the white chocolate, and divide it into separate cups/containers. You need enough different portions of white chocolate for all the different colours you want to have in your unicorn bark. Next, add the food colouring to the white chocolate. Here is where things got a little bit interesting for me… As I mentioned I’m not great in the kitchen, and don’t do much cooking. Hence, I didn’t know that chocolate is oil based, whereas most food colouring is water based. Mixing the two causes chocolate to ‘seize’ and go stiff and crumbly! When this happened I hopped on Google and did some investigating. I discovered that you can buy food colouring that is oil based and suitable to mix with chocolate – if you want your chocolate to stay melted and runny (unlike what happened with mine), do this! Not one to give up, I kept persevering despite my dough-like, crumbly chocolate. Instead of the usual unicorn bark method of pouring the liquid chocolate onto the tray, I instead ‘smushed’ it, as though it was Play Dough! What you have to do is use a fork to flatten it out and blend the colours – once you then smooth it all out using a spoon to remove the fork imprints it looks very pretty, like a melted rainbow! 🙂
(If you used oil based dye and have runnier melted chocolate to work with, pour the different colours around the tray and then run a fork over them to marble the colours together.) Now comes the fun part – the decorating! Sprinkle your colourful bits and pieces on top of the rainbow chocolate, and then lightly pat them down so they become embedded into the chocolate. This extra patting down step is due to the thicker chocolate I ended up with from my kitchen chemistry mishap – if you opted to use an oil based food colouring and had runny melted chocolate as your base, only sprinkling is required 🙂 Now all you have to do is leave your tray in the fridge until the chocolate is completely hardened (it’s so hard to resist the temptation to eat it early!!). Then once its solid, grab it out and crack it into delicious, rainbow-coloured pieces – And you’re done! 🙂

I was so happy with how my unicorn bark turned out, and was so pleased that despite my chocolate mishap I still ended up with something tasty! I think that it would make the perfect treat to wrap up as a present for a friend, or something fun to take along to a party! Of course, it also is just as good kept in your fridge at home as a yummy snack… 🙂 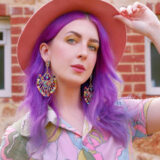